The Lionhead, 2, on marriage, football and super spies 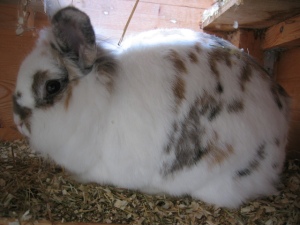 Broccoli tastes vile first thing in the morning but the experience improves as the day wears on.  Baffling, really.

Marriage is bad for interior decorating. Haas is such a romantic soul, digging me a new tunnel every day but his toilet habits are disgusting. Plus he tends to eat the furniture – there’s never any hay left to have an afternoon kip on.

My next-door neighbour is a super spy who probably works for Scientology or something. He is invisible most of the time.  You can spot him when he’s eating because he slurps a lot.

Ordering dinner is a piece of cake. All you have to do is throw your food bowl down the stairs, because they can hear it in the house.   They come running with the pellets, always.

Tunnels will be the summer 2010 hit with the boys.  I’m more into prefab myself.

It’s a lot of work keeping your mane wood chip-free if you’re a Lionhead.  It needs lots of grooming because the fur is extra fine. Haas likes it tidy so he spends most afternoons nuzzling it which helps.

I never got the craze for nose-stripes that seem so popular.  I’m more of a spots and freckles kind of bun.

Children are generally OK but not those horrid screamers in the garden behind our country mansion.

Football is easy. You just need a solid strategy. Fabio calls me most days.

Cats are wimps but then, they are known to have approximately a tenth of a rabbit’s average intelligence. Bless them, it’s not their fault, is it?

This Much I Know – The Guardian